The Use of Mobiles in Disasters

Recent natural and manmade disasters have taught us that resilient communications are vital to saving lives. Available and emerging technologies are evolving to meet the needs of governments, first responders and citizens in better informing all of us about risks and ways to reduce our vulnerability to them. The 2011 Tohoku (Fukushima) disaster brutally demonstrated how unreliable and over-taxed mobile and terrestrial phone networks can be during and immediately after a disaster. And yet there are examples of innovative alternatives that emerged to teach us about communications resilience.

The example of local, untrained, taxi drivers coordinating relief efforts, in isolated areas and situations, over traditional radio frequencies illustrates available alternatives to mobile communications when networks go down. Defining who the key players are in preparing for and recovering from disasters is of primary importance. Mobile operators, government agencies and civil society are finding ways to work together in honing mobile approaches to disaster risk reduction and to incorporate key players into the mobile communications process.

The 2010 Haiti Earthquake offers another example where mobile networks went down temporarily and radio again played the crucial intermittent role in coordinating response efforts to the crisis. In other words, disaster response using mobiles can be unpredictable and problematic. The focus in the communications realm, until now, has been on facilitating communications between relief agencies in the short term, usually using two-way radios, Very High Frequency radios and satellite phones. This tends to exclude those directly impacted by disasters. Inclusion is vital and has long-term benefits, but is expensive to deploy and complicated to coordinate. Mobiles can be invaluable in disaster preparedness and recovery efforts. The ubiquity of mobile ownership and network access means mobile phones are becoming the default method of communication and can make positive contributions before, during and after the disaster strikes. The multiplicity of available applications - voice, SMS and broadband - and citizen familiarity with them increases the range of opportunities. Smartphone games, for example, are helping to prepare school children for catastrophic floods in Thailand and mobile operators are helping to deliver shortcode-enabled emergency texts in many developing countries. The United Nations has been hard at work in putting together a framework for technology-led disaster communications. The United States Agency for International Development (USAID) has been incorporating mobile technology into disaster response efforts since the 1990s. We are currently defining who the key change agents are at the government policy level and how we can better engage partners in developing a comprehensive approach to reducing risk using mobile and other technologies. 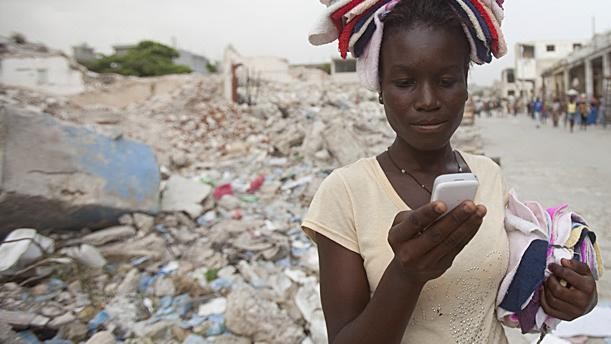 There currently are no standard approaches to emergency preparedness and recovery efforts, since there is already a widely accepted set of standards on both disaster risk reduction and relief activities. Some are high-level bilateral and multilateral instruments, some are industry norms and some are sectorial or country level standards. The recent Nepal disaster presented the growing issue of differing data standards followed by relief organizations. Differing levels of mobile access and literacy have also made it difficult to coordinate efforts using mobile technology alone. Such an approach is counterproductive if we want to remain flexible and adapt to local conditions. USAID supported the establishment of the nationwide call center in Liberia to track infections, report deaths, seek safe burial services and request information on safe practices using basic mobile phone technology. In Mali, for example, USAID co-created a hotline that solicits feedback from citizens participating in a range of peace building activities in partnership with a local mobile operator. Hotline users receive a free call back from operators speaking a range of local languages; data from the calls is then used to refine and inform activities in difficult-to-reach areas. This approach was well planned, locally driven and informed. In partnership with the Government of Kenya, USAID is experimenting with mobile communication platforms that support rapid-response capabilities in Kenya’s increasingly volatile political and security environment where cash messages are sent informing citizens during and after a crisis. This platform also solicits input or feedback on our program activities through short-text surveys and polls and further enables us to gather valuable inputs that inform future activities. The deadly earthquake in Nepal is another reminder of what is possible when leveraging available technology during and after a crisis. While voice services were overwhelmed, the internet was still up and running. Both Facebook and Google enabled services to allow citizens and travellers to post information about their situation or to try to find missing family and friends. Improving network resilience by getting operators, service providers, governments and aid agencies to agree to particular physical infrastructure and data protocols and targets for service maintenance and restoration should be needs-based and equitable, and not based only on access to social media. This problem surfaced in the Tohoku disaster where mobile and PC-based communications were not in the hands of elderly citizens.

Working with the United Nations’ Office for the Coordination of Humanitarian Affairs (OCHA), USAID and other partners are convening to help prioritize the use of information and communications technology in times of crisis. A series of planning sessions has been in the works for some time to help ensure humanitarian information can be freely and ethically shared, and that concerned agencies and communities can better communicate and coordinate. OCHA, UNICEF and the World Food Program, in particular, have had labs testing and piloting mobile technologies for some time. USAID works with Makerere University in Uganda and the INSTEDD labs in Cambodia and Vietnam. USAID, through its ASEAN Connectivity through Trade and Investment program, is also working for increased digital inclusion to reach “last-kilometer” communities with voice and data networks. We are also studying resilient communication networks using promising new technologies like TV White Space. Recovery efforts in Typhoon Haiyan-affected areas in the rural Philippines demonstrate some promising results in re-establishing internet access shortly after a disaster. These gains wouldn’t be realized without support from local governments and communities.

There is a definite appeal to resilient communications infrastructure that can be rapidly deployable through temporary nodes ranging from large scale tactical data systems to femtocells, the latter of which can create local mesh networks and can be operated off grid in austere environments. While not a major factor in the restoration of critical communications for recovery or relief after the Typhoon Haiyan disaster, TV White Space is still worth investigating as an emergency backup network. During and after Haiyan, Twitter was the single greatest social media driven mobile application used for response and recovery efforts. Tweets over SMS were widely distributed without data connectivity. This is a promising development that should be studied in greater detail. 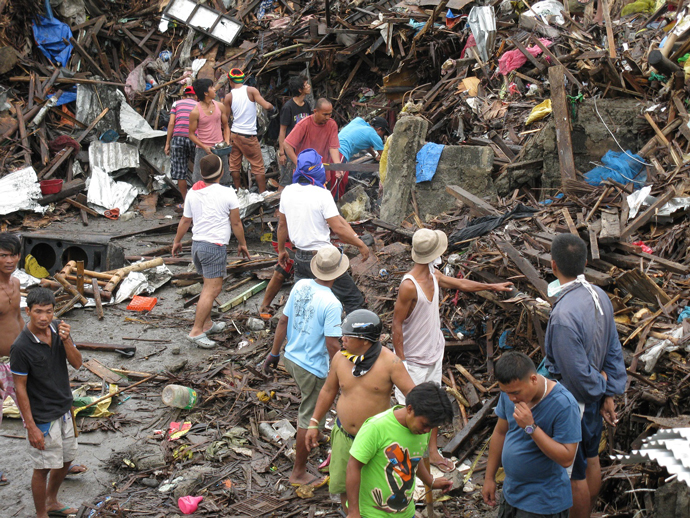 There are mobile applications currently being developed that can be used by local governments, non-governmental organizations and mobile operators to help prepare citizens and emergency response teams for almost any crisis. There are a range of protocols and principles for disaster risk reduction and relief operations which guide the content of any application. A standardized approach could undermine the innovation and flexibility we seek from this medium for improving how we message the value of preparedness. Those of us from the humanitarian profession work in close partnership with non-profit and for-profit mobile application developers and operators in securing mobile emergency products and services to adequately prepare our citizens for disasters. USAID and the U.S. Department of State sponsor regular hackathons which bring together public and private sector expertise to address community level risks through the use of mobile apps and innovative uses of science and technology. These actors also help to push voice and data networks to the last kilometer. Mobile preparedness for vulnerable communities means access to mobile networks and solutions – hopefully saving more lives in the event of future disasters. And while mobile network coverage has grown exponentially over the past decade, high-speed connections for rich data are still lacking. Disaster risk reduction and emergency response applications that are inherently flexible and have an offline capability will help ensure more resilient communications.

Immediately after the crisis phase, the inevitable clean-up and recovery efforts begin. Mobiles can play an important role in alleviating uncertainty and stress associated with these efforts. Building resilient communities means building resilient telecommunications networks. Recovery is heavily focused on coordinating people and resources. A growing area of exploration is microinsurance policies that are bundled into a citizen’s SIM card. Insurance can also help relieve stress and increase a person’s resilience to a disaster, and can be more effectively distributed through mobile 38 networks. In response to Super Typhoon Maysak in the Pacific, USAID’s partner, the International Organization for Migration (IOM), is piloting an innovative digital geospatial assessment tool for municipal and household-level damage measurements used in evaluating community needs, verifying property ownership and the disaster assistance needed per community, per household.

IOM is using a tablet-driven technology that links beneficiaries to a database of relief supplies. The system can work online (3G) and offline and is reducing the time usually needed in coordinating relief and reconstruction efforts. This emerging example of how mobile technology can assist disaster recovery services is still evolving. And anytime a new technology like this is introduced, we make an effort to train relevant staff and volunteers in the use of new devices and applications. At the very least, public and private leaders should help enable citizens to access reliable networks, provide emergency alerts and instructions during a crisis or disaster and ensure expedient and efficient recovery efforts. Being sensitive to the challenges of citizen access to information is important in moving forward, regardless of technology.

We should also be aware that not all are able to access 3G wireless broadband services with expensive smartphones. Most citizens we work with have basic, feature phones and are unable to access mobile applications. In many instances, it is still radio that reaches those most affected. The use of interactive voice recognition and low-tech user menus (USSD) is another available technology in the hands of most rural citizens. So our efforts need to be agile, simple and affordable. We should not shy away from the development of “smart” disaster readiness and recovery applications, however, since mobile broadband services are expected to increase their reach and the expense for smartphones continues to decline with the advent of cheaper handsets. Economies of scale are making the cost vs. benefit of developing and using mobiles more advantageous than ever. No, mobile technology is not a silver bullet by any means. In Nepal, for example, it still takes several days to reach affected areas via pack mules. The evolution of more resilient communications isn’t inevitable, as it still requires a concerted effort of public and private partners in harnessing innovative approaches to saving lives during and after disaster strikes.

Author Biography: Steve Rynecki is a senior international development and program management specialist with nearly two decades of economic growth experience in both the public and private sectors. Early in his career, Steve was a privatization communications specialist for USAID projects in the former Soviet Union. Over the past decade, Steve’s been leveraging advances in technology to solve complex development challenges worldwide. Steve engages trade groups, government ministries and program beneficiaries to understand where technology can support USAID development objectives. He’s one of the Agency’s leading mobile innovations experts recognized for leadership in digital finance and ICT workforce programs.

Article can be downloaded here