Ghana and its Volta River, which supports the livelihoods of millions in six West African countries, is under stress from climate change and increasing water demands – impacts that are especially likely to affect the rural poor, according to two recently-published studies by the International Water Management Institute, a CGIAR Consortium Center.

Farmers toiling under the equatorial sun in the low-lying plains near the Volta River in Ghana know only too well the vagaries of rainfall. If their market vegetables, such as chili peppers and onions, don’t get water for three days, they will die. An estimated 60 per cent of Ghana’s population depends on agriculture for their livelihoods. The rural poor rely almost exclusively on agriculture for sustenance. Yet only a small fraction of the farmland is irrigated, meaning most of the country’s food production relies on rainfall. That makes life difficult enough, but then factor in climate change and a growing population.

LENGTHENING OF RAINLESS PERIODS
In one Ghana study, researchers analysed 45 years of rainfall records and applied a new technique that enabled rainfall trends to be determined at the regional level, rather than the more traditional approach of individual rain gauges. Researchers examined data at 16 rain gauge stations across Ghana. No significant changes were observed in annual rainfall, but the data showed fewer wet season days, and a lengthening of rainless periods during the wet season in south and central Ghana.

Guillaume Lacombe, a hydrologist in IWMI’s Vientiane, Laos, office, and one of the leading researchers of the study says that he does not think anyone has demonstrated before that Ghana is drying. Twenty-eight variables were computed to capture the seasonality, intensity and frequency of rainfall. Those variables included rainfall depths, the number of rainy days per season for different ranges of daily rainfall, and the length of the longest rainless period. “It showed that trends at most stations were statistically insignificant, but that over the region as a whole there was a statistically significant drying trend due to increasing delay in the onset of the wet season,” Lacombe said. The results were unlikely to have occurred by chance. They were regionally significant at a 95 per cent confidence level.

Looking at the particular variables, enabled the researchers to detect changes likely to impact livelihoods. The delay in the onset of the wet season already is likely to have resulted in a reduction of agricultural yields, since most planting begins with the first rains and the early stages are most sensitive to water shortages.

Diminished rainfall and increased drought are likely to reduce the resilience of farmers and increase poverty. An increasing population and growing economy also exacerbates the imbalance between water demand and supply.

CASE STUDY: VOLTA RIVER BASIN
A separate study examined the possible implications of one climate change scenario on the water resources of the Volta River basin. The Volta River, which flows from the semi-arid Sahel in north central Africa to the farmlands of southern Ghana in West Africa, is a driving force for the region’s agricultural sector and economy. Water is used to generate hydroelectricity and to support crop and livestock production, fishing, mining and quarrying, lumber, manufacturing, transportation and tourism.

The 430,000-square-km Volta Basin lies mostly in Burkina Faso (43 per cent) and Ghana (42 per cent), also touching on Benin, Cote d’Ivoire, Mali and Togo. Three-quarters of the annual rainfall comes between May and August, the months of the West African monsoon. The most significant development in the basin is the Akosombo Dam in Ghana, which was built in the 1960s for hydropower. The dam created Lake Volta, the world’s largest human-made lake with an area of 8,502 square km and a storage capacity of 148,000 cubic meters.

A model called SWAT was used to simulate the hydrology of the Volta Basin, with the results from a climate change model used as input. Output from the hydrological model, was fed into a water resources model, called WEAP, to evaluate the implications of possible climate change on irrigation, hydropower, domestic water and livestock watering.

Results of the study were bleak:

By the middle of the 21st century, rainfall, runoff and groundwater recharge will all decline, undermining the performance of existing and planned reservoirs.

Under the “intermediate” development scenario—slightly more development than currently the case—climate change is anticipated to reduce average annual hydropower generation by 30 per cent by 2050 and increase average annual irrigation demand by fourfold.
This could have potentially severe implications for livelihoods and the economies of the region.
To ensure food and economic security and avert worsening malnutrition and poverty, much more systematic water-resource planning will be needed in Ghana as well as more cooperation among the West African countries that rely on the Volta River, the researchers said. 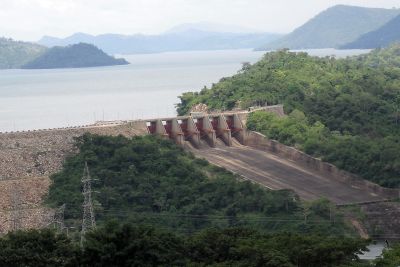 Another IWMI scientist, Matthew McCartney, who led the study, thinks that consideration needs to be given to integrated, transnational storage systems and innovative solutions such as managed aquifer recharge. Managed aquifer recharge is the process of systematically storing water in aquifers for reuse. “But climate change also requires going beyond water and to consider other sectors as well,” he told me. It’s essential, the Volta River report’s authors say, that a strategy be developed that includes a water storage development plan that will enable larger areas to be irrigated and more hydroelectricity to be generated. Akosombo has an installed generating capacity of 1,020 megawatts and Ghana has plans to add nearly 1,000 megawatts of power to support industrial development and food security, including the 400-megwatt Bui dam under construction. If all the dams are built, water storage capacity in the region would increase by 49,000 cubic meters. Burkina Faso also has a number of dams planned.

However, climate change will significantly compromise the system’s performance, researchers forecasted. The situation is likely to get worse in succeeding decades.

The researchers caution that it’s not possible to quantify a margin of error for the entire study because a combination of models was applied. Therefore, results should be considered indicative rather than absolute.
Additional options may hold promise for the rural poor to build resilience to climate-change impacts.

IWMI recently led a separate research project to help smallholder farmers in Sub-Saharan Africa and India. The three-year AgWater Management Solutions Project (AWM) was funded by the Bill & Melinda Gates Foundation. Researchers found that in the Volta River region, most farmers rely on rainfall and water they haul in buckets from the river. Only a small portion pump water from the river and bring it to their fields through pipes.

Hooking up with local partners was an important part of IWMI’s approach. Professor Saa Dittoh, of the University of Development Studies in Tamale, Ghana helped coordinate the research in Ghana. He says that part of the reason why farmers are poor, especially in areas where the dry season is very critical, is because they produce only during the rainy season. The AWM project showed that opportunities exist to help smallholder farmers and, in the process, boost food security for the rural poor.

Recommendations included increasing micro-credit financing, access to pump rental markets, and training. New technologies also offer potential, such as solar pumps and the use of satellite images to analyse groundwater resources, crop yields and climate-change impacts.
Those ideas may one day help Ghanaian farmers whose fields are near the Volta River, become more resilient to climate-change impacts.

Today, water is not so easy to get, even with her proximity to the Volta River. As one riverside farmer said in a video interview shot as part of the project: “The water (of the river) is so far that we have to dig a well here and line it with blocks: that is how we get the water.”

This article was originally published on Climate Action 2013-2014 (www.climateactionprogramme.org)

The International Water Management Institute (IWMI) is a non-profit, scientific research organisation focusing on the sustainable use of water and land resources in developing countries. IWMI works with its partners to develop scalable agricultural water management solutions that have a real impact on poverty reduction, food security and ecosystem health.