As future water supplies become increasingly threatened by climate change – characterised by increased flooding in some areas and drought in others – it will be even more critical for cities in developing countries to manage water efficiently and safely. In this article the author describes the work of the URAdapt project in Accra and Addis Ababa.

When city water doesn’t flow, lower-income Ghanaians in the capital of Accra trudge along neighborhood streets and paths, carrying empty yellow palm oil containers and other vessels to fill with water. They stand in long lines at makeshift depots such as locations with water storage tanks.

When heavy rains cause flooding, there is a different challenge: water often overwhelms the storm and sewage systems. Flooding can inundate areas, damaging homes and shanties, increasing the prevalence of contaminated water and mosquitoes, and heightening the risk of cholera outbreaks.

About 40 per cent of Africa’s 1 billion people now live in urban areas, according to the United Nations, and 60 per cent of those live in slums. In many cities across Africa, water and waste water management infrastructure lags far behind an increasing demand caused by a bulging population. The poor especially are vulnerable.

A key element of URAdapt was its participatory process.

International Water Management Institute (IWMI), a CGIAR Consortium centre based in Colombo, Sri Lanka, recently worked for nearly three years in Accra and Addis Ababa, Ethiopia, to develop adaptation strategies through a project called URAdapt. The programme was supported by Climate Change Adaptation in Africa, and jointly funded by the International Development Research Center (IDRC) of Canada and the United Kingdom’s Department for International Development (DFID). 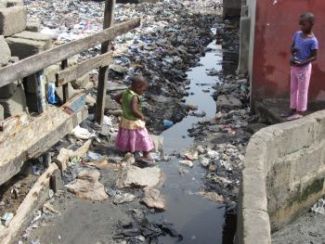 After all, properly managed and treated water is central to the well-being of any city – critical to food security, good health and a vibrant market economy. Accra and Addis Ababa are typical African cities selected for their different geographic characteristics, Raschid said. In the case of Accra, water comes from two basins and its waste water is discharged untreated into the ocean, which is used for swimming, fishing and to attract tourism. Only a small amount of fresh water is used downstream for agriculture. Addis, meanwhile, is landlocked. Water is discharged with little treatment into the Akaki River, and ends up downstream where vegetables are grown and livestock is raised. The quality of the Akaki River has deteriorated over the past four decades and the trend is likely to continue, given the lack of planning and enforcement of pollution control regulations.

Raschid points out that the two cities have distinct problems pertaining to water resource management, so impacts and adaptation measures are different. “Governments really haven’t paid attention to what happens to cities in relation to climate change, especially to poor urban dwellers living in low-lying areas.”

A key element of URAdapt was its participatory process to come up with solutions. Government officials, university researchers, sanitation managers, private industry groups and non-governmental organisations (NGOs) worked together to identify the most pertinent research issues, gather data and develop an urban water-management plan. Such buy-in also is necessary when trying to persuade governments to invest in water-management improvements.

“For identifying suitable adaptation options, participation of vulnerable groups is critical. In theory, this is possible to set up,” Raschid said. “But in practice, they aren’t organised so one is not always successful in including the marginalised and women.” In Ghana, for example, the poor were represented by the People’s Dialogue, an NGO that works in city slums. 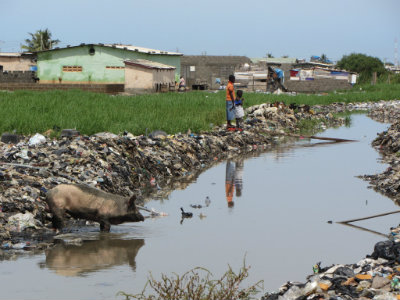 SCALING DOWN THE MODELS

A second critical aspect to the project was to scale down global climate change models to the city level and the area basins. The models forecast how temperatures and rainfall are likely to change in the future. Raschid believes that it is something quite new to look at city-level changes. Researchers also conducted hydrological and urban water allocation modelling, and socio-economic studies of vulnerable communities.

For both Accra and Addis, local universities helped run regional climate models to analyse historic climate data, and downscale the results to city and basin level. For example, in Accra, the results were downscaled to 10 km by 10 km grids to simulate likely scenarios for the Densu River Basin, which supplies water to large portions of eastern Accra.

The most likely scenario predicted an increase in average temperatures of between 0.5 and 0.8°C by 2050, more erratic and extreme rainfall, and a tripling of drought events. The Densu basin is already considered ‘water-stressed’.

In Ethiopia, urban flooding is occurring more frequently. Climate downscaling predicted a 37 per cent increase in extreme rainfall and floods by the 2030s, with larger impacts in the Addis area because of its crowded population of around 3 million. The models predict a 13 per cent increase in the annual flow volume of the Akaki River basin by the 2030s.

The project in essence examined climatic and non-climatic drivers in efforts to predict how both of these might play out. What does climate change mean to water availability and quality? How will it impact storm water runoff? Will there be more flooding? When it comes to a city’s water cycle, all sorts of factors come into play, Raschid said: water supply, sanitation, the quality of water downstream, the possibilities of droughts or flash floods.

The project mapped out hotspots which have poor water supply and sanitation services, compounded by urban flooding. URAdapt studied in detail one of the hotspots in Accra – the poor, low-lying community of Gbegbeyise where flooding is a common issue. Researchers sampled stream water, soil and drinking water, and found that water contamination rose after flooding with increased readings of fecal coliforms, indicative of fecal pollution. In addition increased levels of Vibrio cholerae – which can potentially cause cholera – were found in drinking water sources. 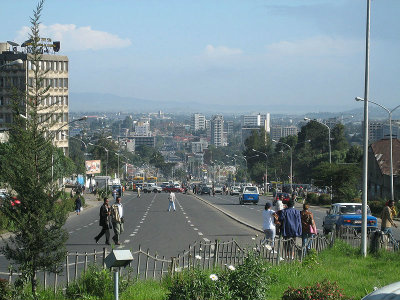 The national water utility – the Ghana Water Company – carries a lot of decision-making influence over Accra. Basin authorities exist, but without much power, according to Raschid. Overall, the system to manage water in basins and between urban and rural needs is shaky, and the water isn’t being used optimally, she said.

Sewage treatment already lags miles behind need in Addis, and farmers downstream rely on irrigation water which is heavily polluted. If changes are not made, treatment and drainage facilities could flood, leading to further water contamination, public health risks and an increase in sickness and death of cattle.

IWMI researchers found that institutional change requires support from the superiors of the government officials and industry players involved in the project. Raschid said governments have to be persuaded about the importance of science to change public policy.

URAdapt’s recommendations were endorsed by a national climate change committee in Accra and by the Water and Energy Ministry in Addis. But the strategic agenda for adaptation still needs follow-up action and funding and support from the highest levels of the government.

“For water supply, you have to work with the city of Accra,” Raschid said, “but lots of decisions took place outside the city. Water is considered a national good and managed nationally.”

In Ethiopia, Addis city authorities have decision-making power and are responsible for supplying water to growing towns around it. So URAdapt was able to integrate its research into the ongoing activities of the Addis Ababa Water and Sewerage Authority. But better regional planning also needs to occur, as well as support from the national government.

In Addis, climate change adaptation measures appeared to be ad hoc, with little long-term strategies in place. The research showed that if water resources are managed properly, Addis can become considerably more resilient to climate change even with a growing population, and that the solutions can be applied to other cities in Ethiopia.

URAdapt was designed to support science-based policy change, using a participatory process, and incorporating climate change forecasts downscaled to the city level. Connections were made between urban and rural needs. Ideally, the URAdapt principles can spread to other African cities. But more time and donor support will be needed to influence public policy decisions. The next steps will be critical to move from research into implementation.

This article was originally published on Sustainable Cities - June 2013

Jeff Smith has worked as a journalist and media development trainer in Asia, Africa and the United States for the past 25 years. Most recently he has written about energy and its intersection with poverty, biodiversity and development for National Geographic. com. He is based in Colombo, Sri Lanka.

The International Water Management Institute (IWMI) is one of 15 international research centres supported by the network of 60 governments, private foundations and international and regional organisations collectively known as CGIAR. It is a non-profit organisation with a staff of 350 and offices in over 10 countries across Asia and Africa and Headquarters in Colombo, Sri Lanka.